For translators working on SAP translation, the Proposal Pool is an essential part of their toolset. It helps them get more done faster, and it enables them to deliver better-quality translations. But the Proposal Pool is much more than just a handy tool to speed up a translator’s daily work. You can use it to automate your SAP translation project, handle duplicate texts, and implement system-wide terminology changes. This is part two of a two-part series, you can read part one here.

But copying over translations from a translation memory can also be dangerous, since any translation that you are copying over may have been created for a completely different context than the text that is now to be pre-translated. For user interface texts, where texts are often very short, and are often abbreviated because of space constraints, pre-translation is not quite as effective. This is because the shorter texts are, the more ambiguous they tend to be. “Cancel” for example can refer to cancelling an action, but can also mean cancelling an invoice, and in many languages, these two meanings are translated differently.

Ambiguous texts such as Cancel are ill-suited for pre-translation. Stornieren refers to cancelling an invoice in German, while Abbrechen means cancelling an action.

This is where the Proposal Pool’s quality status concept comes in. With most translation memories, it is possible to store multiple translations for the same source text, but all those translations are created equal. In SAP systems, translators can classify proposal pool entries as ambiguous, and they can mark entries for Automatic Distribution, which is SAP’s pre-translation feature.

This means when you pre-translate SAP user interface texts, you can decide to only copy over texts that were marked by translators for Automatic Distribution. Proposals for source texts that can have more than one meaning (such as “Cancel” in our above example) will not be distributed. Instead, only those proposals will be used that were intended for this purpose. The fact that proposals can be tied to a specific terminology domain also helps here – a proposal created for applications component FI will never be used to pre-translate an HR text. So while pre-translation saves you manual effort, you can also be sure translation quality does not suffer. 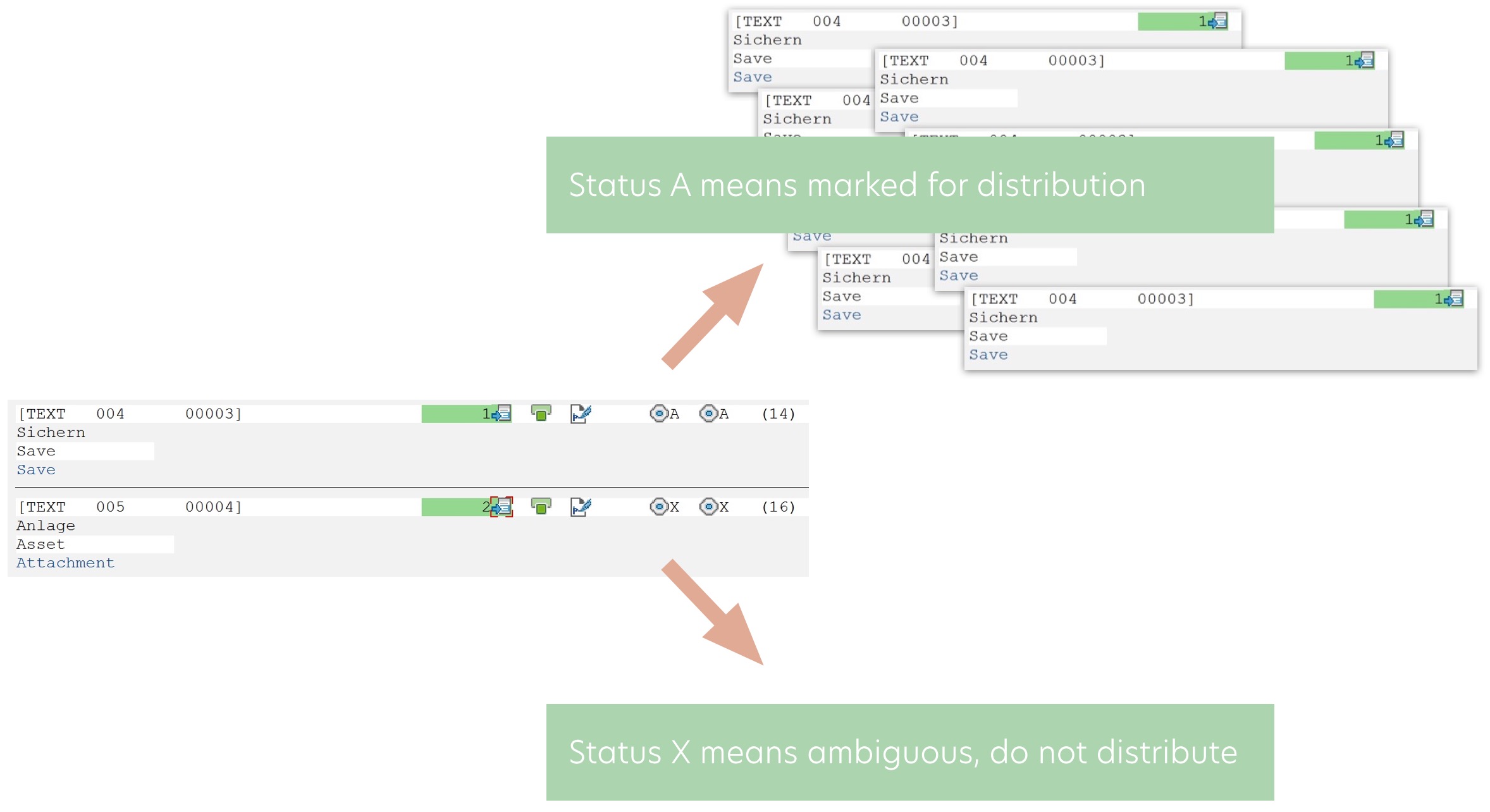 The Ties that Bind

Another unique feature of the Proposal Pool is the way that proposals are tied to the translation status. In SAP systems, a short text only counts as translated if it has a matching proposal. If it does not, it is flagged for review, and translators have to process it again. One way this feature can work to your advantage is if you want to change a term across your entire translation project.

Let’s say you translated from German into English, and your translators had been instructed to translate “Buchungskreis” as “Booking Ledger”. Later you find out that the correct term is in fact “Company Code”. In most translation projects, you would need to find each and every occurrence of the incorrect term and change it. In SAP systems, you can simply search the Proposal Pool and delete all the incorrect entries. This will flag all the incorrect translations for review, since without a matching proposal, they no longer count as translated. Making project-wide corrections has never been easier. 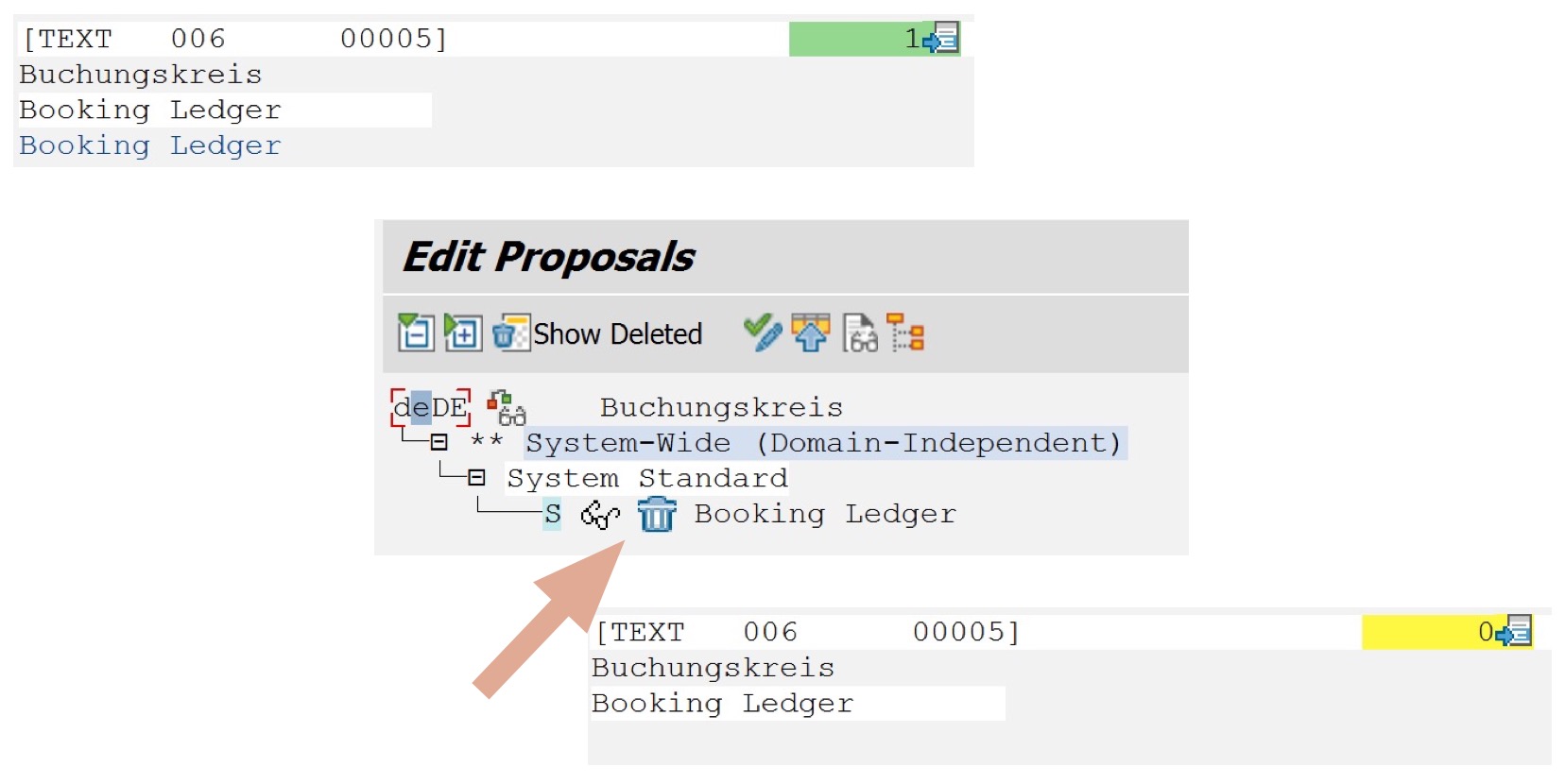 Deleting an incorrect proposal immediately renders all translations using that proposal invalid and marks them for review.

Before you first start translating in your SAP system, your proposal pool will be empty. But if you imported any SAP Language Packs, your system already contains millions of translations. What if you could make those translations available for re-use in your translation project? Well, you can, if you copy some of them into the Proposal Pool.

This was one of the first automation features that SAP translation consultants dreamed up. And while this functionality has never made it to the SAP Standard (possibly because it would be of little use to SAP itself, who probably oversees the largest Proposal Pool on the planet), a number of third-party tools exist that offer this functionality. It probably still is the single most effective feature for automating SAP translation projects - and it is all thanks to the Proposal Pool.

The Future of the Proposal Pool

When singing the praises of a feature that is now almost thirty years old, you cannot help but wonder how long it will be around. For the next few years, it is likely that ABAP-stack systems will continue to form the backend of SAP on-premise installations. But no software is forever, and eventually, the tools that we currently use to translate SAP texts are bound to be replaced with something new.

When that day comes, when SAP develops the next generation of translation tools, there certainly is a lot that can be improved when it comes to the experience that transaction SE63 offers customers today. But if any feature deserves to inspire and guide the thinking that goes into the new solution, it surely is the Proposal Pool.