Translation in a Multi-System Environment

If you are running a simple three-system SAP landscape, and you only rarely change your development system, count yourself lucky. The more development systems you have, the more overhead there is. And nowhere is this more true than with translation. This is a short overview of how to approach translating in multiple systems at the same time. 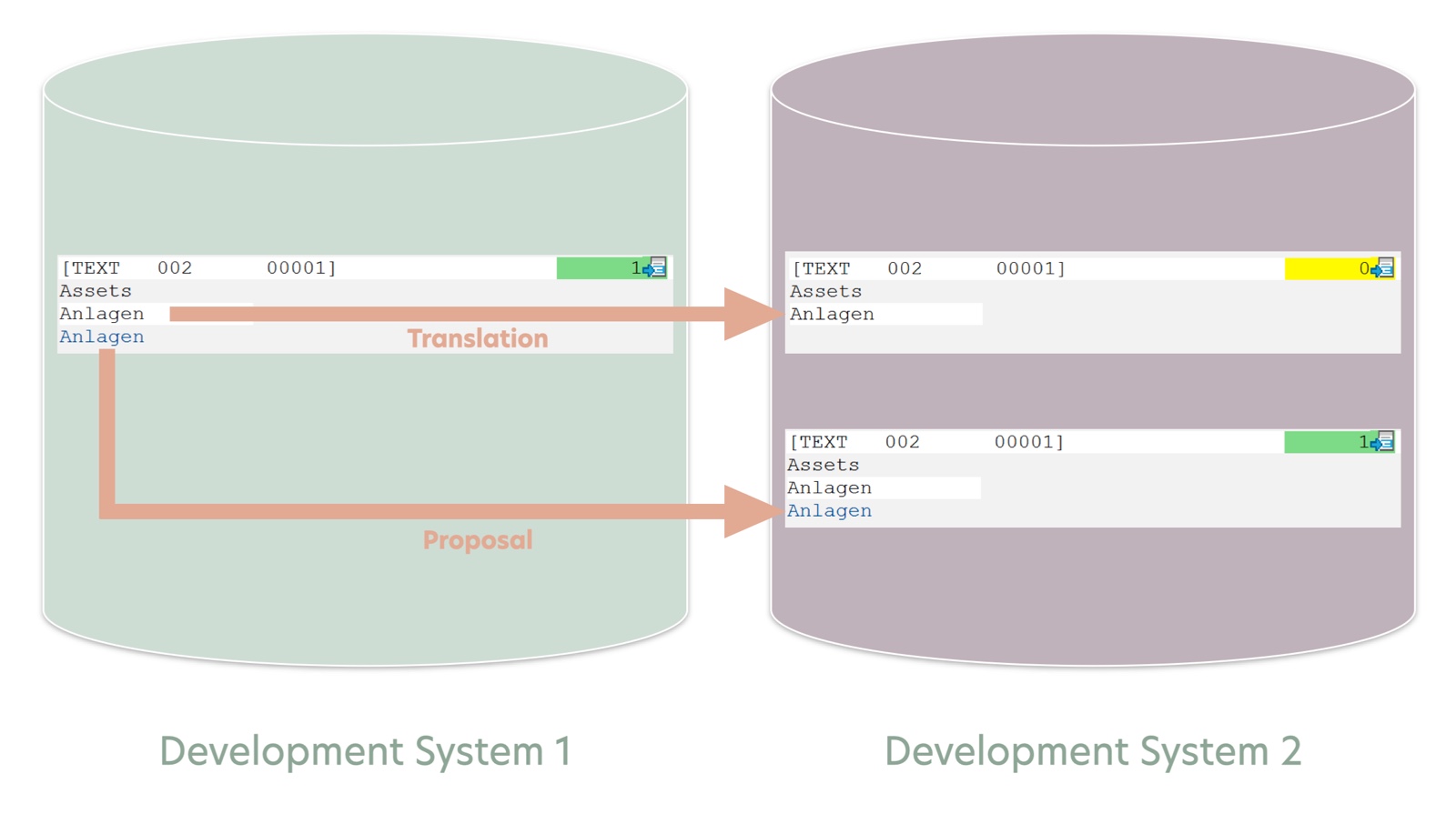 Prior to the import, lines have status Modified (yellow), but after the import, the matching proposal grants them the Translated (green) status.

This step is often skipped, but it is very important. If you do not move the proposal pool, you lose data related to the translations you have already done. The reason for this is that any translations that exist in the new system will not have the Translated status unless a matching proposal is available (I have explained the underlying logic in this article). When you are moving translations to a new development system, without moving the proposal pools as well, your translated texts will not actually be considered to be translated by the SAP Standard translation environment. You will not be able to tell your own translated texts from translated SAP Standard texts (for which SAP does not deliver proposals), or from any lines where the source text has been changed in the meantime and the translation does not fit anymore.

In this scenario, once you start the first translation project in the new system, there will be a large amount of texts where you are left with the choice of either reviewing them all again, or accepting that some of them will probably not be correct. That is why moving proposal pools to a new system may be the most important thing to remember, in case this is not already on your checklist. If you have performed translations is the past, do not decommission an old development system without checking if there are translation proposals that you need to move to the system that replaces it! 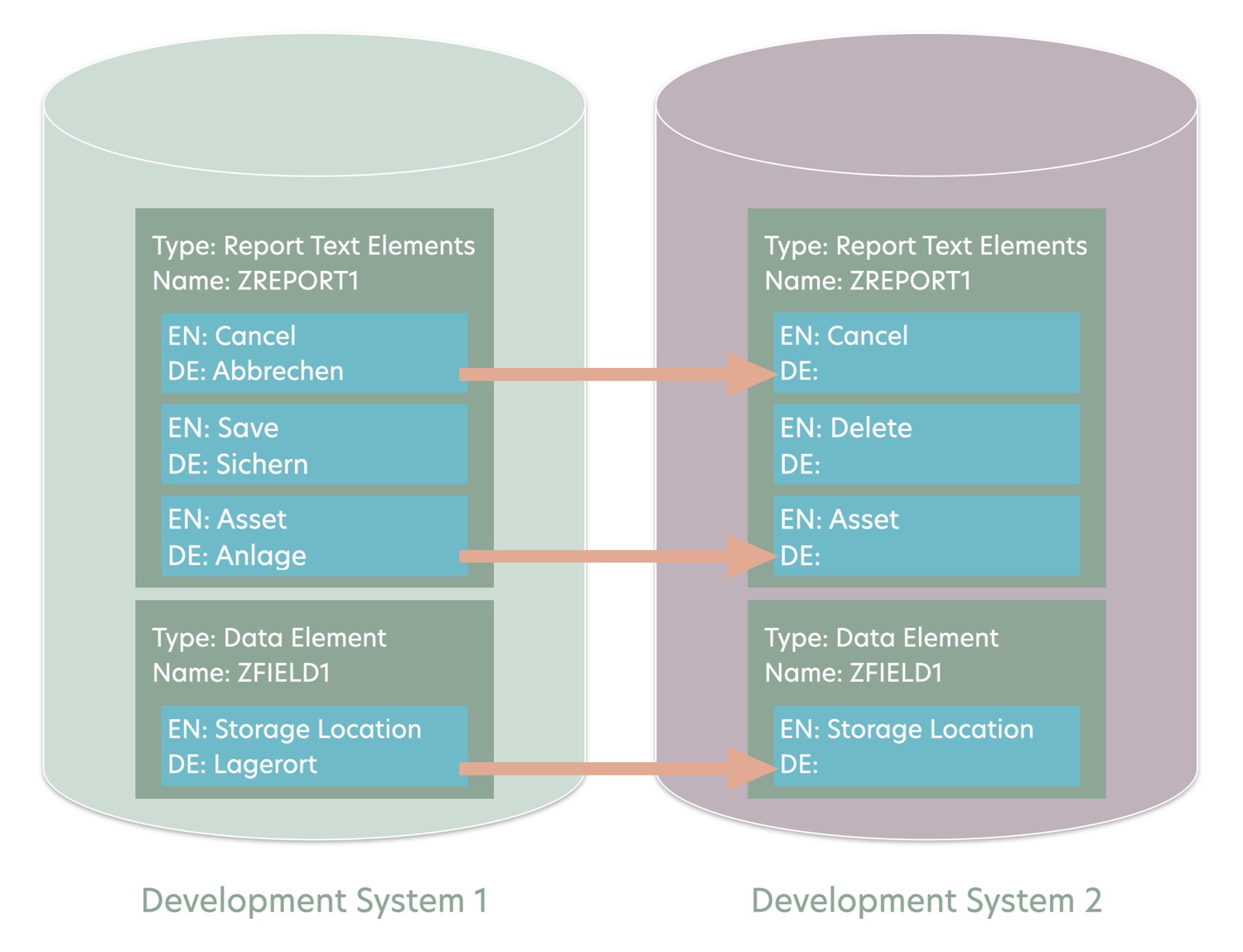 For identical objects the RFC copy feature brings over translations as well as the associated proposals from another system.

A good way to combat this is the RFC copy feature, which has been available since SAP_BASIS 7.40 (it was also made available on earlier releases via support packages). With this feature, you can copy translations for identical objects from other systems, via an RFC connection. What this means is, when you run a worklist evaluation, it will check for each object if the same object also exists in the reference system. For each identical object, if that object contains lines that are translated on the reference system but untranslated on the current system, it will copy over the translations to the current system. And best of all, it will copy the associated proposals, too.

This not only keeps the translations in sync, it also saves a lot of work, since identical texts will only have to be translated once. Depending on your translation strategy, it may still make sense to regularly transport the proposal pools between the systems. But if your systems are used to translate modules or products with very different terminology, it may also make sense to only use RFC copy. In many projects, this feature has been such a problem-solver that it’s easily my favorite addition to the SAP Standard translation tools since SAP_BASIS 7.40.

Both for the initial sync and the regular sync between two translation systems, the SAP Standard gives you the tools you need to get translations and proposals from one system to another. If you need tools that go beyond those features, such as integration between translating outside the SAP system and translating in transaction SE63, or moving translations and proposals for Fiori texts, our custom tools can help you out. But if you take one thing from this article with you, let it be this: don’t forget to move your proposal pools!